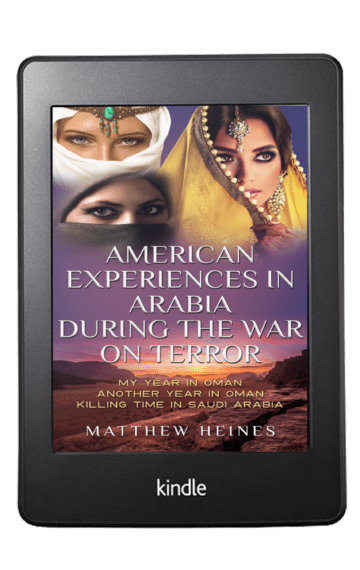 A Thousand Arabian Nights on One Kindle

A Dreamy Journey to the Beautiful Oman

“As I sat reading “My Year in Oman: An American Experience in Arabia During the War on Terror” by Matthew D. Heines, I dreamt of a land yet unexplored by me.”

My Year in Oman: An American Experience in Arabia During the War On Terror

Two months after the terror attacks of 9/11, the author accepts a teaching contract in an obscure country called the Sultanate of Oman.

Suddenly, the author finds himself in an ancient Kingdom on the southern tip of Arabia just two decades away from the Middle Ages.

Of course, Matthew Heines doesn’t know any of this until he shows up at midnight in Muscat, the capitol of Oman.

Then, he has two hundred miles to go across mountains, wadis and deserts and with no one to show him how to get to a little town called Sur.

This American’s adventure of a lifetime, and yours is just beginning.

Another Year in Oman: Between Iraq and a Hard Place

Another Year in Oman: Between Iraq and a Hard Place, the second book in the American Experiences in Arabia During the War On Terror series, puts you right back where My Year in Oman left off.

The adventures begin on the shores of Oman, next to the Indian Ocean, on the coast of Arabia, in a little town called Sur.

Only this time around, things have changed and so have the adventures.

With the freedom to travel and experience even more of Oman and the United Arab Emirates, join the author as he replaces loneliness with wanderlust.

Once again, he finds love and beauty in Oman and the UAE. Only this time, it’s where you would least expect it.

It’s the third book of the American Experiences in Arabia During the War On Terror Series.

The author, Matthew Heines, finds himself on a military contract in Riyadh, Saudi Arabia.

His employer is tasked with training the Saudi Arabian National Guard.

They need Matthew Heines to train their officers in the art of the English Language.

Unbeknownst to the author, he’s a replacement for teachers who were blown up during the terrorist bombing of their compound in 2003.

After he finds himself in the middle of the revolt incited by events at Abu Ghraib prison in Iraq by US forces in 2004, Matthew Heines must find a way to survive.

Matthew Heines must also find a way to date one of the beautiful nurses working at the National Guard hospital nearby.

American Experiences in Arabia During the War On Terror

Three books on one Kindle for one amazing low price.

It’s the adventure of the ages.